The Bitterest Pills: The Troubling Story of Antipsychotic Drugs

Antipsychotic (neuroleptic) drugs have become some of the biggest blockbusters of the early 21st century, increasingly prescribed not just to people with ‘schizophrenia’ or other severe forms of mental disturbance but for a range of more common psychological complaints. This book challenges the accepted account that portrays antipsychotics as specific treatments that target an underlying brain disease and explores early views that suggested, in contrast, that antipsychotics achieve their effects by inducing a state of neurological suppression. Professional enthusiasm for antipsychotics eclipsed this understanding, exaggerated the benefits of antipsychotics and minimized or ignored evidence of their toxic effects. The pharmaceutical industry has been involved in expanding the use of antipsychotics into territory where it is likely that their dangers far outweigh their advantages.
Click here to buy a copy of The Bitterest Pills

The Myth of the Chemical Cure: A Critique of Psychiatric Drug Treatment

This book exposes the traditional view that psychiatric drugs target underlying diseases, or correct chemical imbalances, as a fraud. It traces the emergence of this view and suggests that it was adopted, not because there was any evidence to support it, but because it served the vested interests of the psychiatric profession, the pharmaceutical industry and the modern state. Instead it is proposed that psychiatric drugs ‘work’ by creating altered mental states, which may suppress the symptoms of psychiatric disorders, along with other intellectual and emotional functions. Research on antipsychotics, antidepressants, mood stabilisers and stimulants is examined to demonstrate this thesis and the pros and cons of using the different sorts of drugs are discussed. It is suggested that acknowledging the real nature of psychiatric drugs would lead to a more democratic practice of psychiatry.
Click here to buy a copy of The Myth of the Chemical Cure 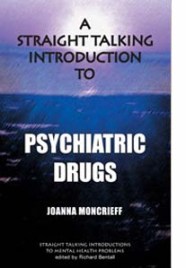 A pocket sized, good value series of succinct, thought provoking introductions ideal for students in all mental health disciplines, psychiatric service users, carers and indeed everyone with an interest in mental health. The authors are acknowledged leaders in their respective specialist fields with reputations for clear thinking, realistic, compassionate approaches and straight talking. 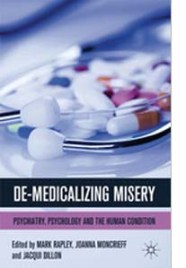 Thomas Szasz (1960) suggested that the myth of ‘mental illness’ functions to ‘render more palatable the bitter pill of moral conflict in human relations’. The medicalization of distress enables the mental health professions to manage the human suffering that they are confronted with, and also the suspicion that there is little that they can do to help. But the medicalization of misery and madness renders people unable to comprehend their experiences in ordinary, meaningful terms. In this collection we restore to everyday discourse a way of understanding distress that, unlike contemporary psychiatry and psychology, recognises and respects the essential humanness of the human condition. De-medicalizing Misery is a shorthand term for this project. The book resists the psychiatrization and psychologization of human experience, and seeks to place what are essentially moral and political – not medical – matters back at the centre of our understanding of human suffering.
Click here to buy a copy of De-Medicalizing Misery