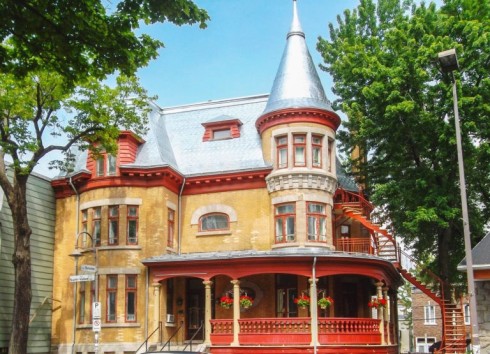 I am often asked about alternative ways of helping people with severe mental disorder, especially psychosis. This guest blog by Antoine B.-Duchesne and Sarah Pham describes one such facility in Quebec. It is founded on psychoanalytic principles, but provides a holistic form of care that aims to promote community integration and help people find meaning:

For more than 30 years, the “388” has been a haven for people struggling with psychosis. A humble Victorian-Era house sitting amidst a bustling neighbourhood of Quebec City (Canada), this unique clinic is dedicated to providing an integrated, psychoanalytically-informed treatment of psychosis to willing users. Now considered by patients and families alike as a pillar of community treatment, it is still today one of the few places where patients can be “[…] accepted as [they] are, for what [they] may become. ”

Since it opened in 1982, the main goal of the “388” has been to deliver an alternative, yet state-of-the-art, therapeutic approach to young people suffering from schizophrenia or related disorders. How did the “388” achieve this? First and foremost, its founders began by challenging the longstanding assumption that psychosis cannot be treated with psychoanalysis. In order to allow psychotherapeutic work with psychosis, they had to create a new theoretical framework, which was based on their previous clinical experience with patients as well as on Freudian and Lacanian psychoanalytic therapy. The specifics of how they managed to integrate this clinical experience with psychoanalysis is beyond the scope of this article, but is detailed in numerous publications (see the references below for details). This theoretical stance is fundamental to the centre, as it informs the perspective of the whole team and thus provides a common understanding of the problems encountered by users.

“In the end, the most fundamental thing that psychoanalysis has brought to me is the freedom to stop destroying, and the freedom to start constructing.”
However, patients are not required to undertake a psychoanalytic therapy in order to start attending the centre. Psychoanalysis is indeed the cornerstone of treatment, so all users will be invited to engage in psychoanalytic work at some point. Still, psychoanalysis is only one part of a holistic approach including regular psychiatric follow-up, patient and family support by a team of mental health workers, art workshops with professional artists (engaged in music, visual arts, writing, drama, ceramics, etc.) from Quebec City, and many community-based activities (such as cultural activities, sports, etc.) that promote social integration. Users can also get involved in collective projects such as participating in biannual camp stays or by organising trips (for example, in 2016, some users self-funded a trip to New York City).

“What is mental illness? It is a feeling of exclusion. That’s my problem: I feel excluded.”

Group integration is a crucial part of helping patients: from a psychoanalytic standpoint, one of the main aspects of psychosis is that it loosens the bond between subjective experience and social reality. As social reality is, at least in part, collectively constructed and reinforced, people with psychosis may tend to become isolated and excluded from their communities. Furthermore, because this social space becomes persecutory, they might not understand how they could manage to give a voice to their own aspirations inside it. Hence, the “388’s” structure is entirely oriented towards promoting the reinsertion of psychotic individuals into the social link. What makes this “reinsertion” different from traditional social recovery therapies, though, is that it aims to support patients in their attempts to take part in social life, without giving up on their inner desires and aspirations. This orientation is directly drawn from psychoanalysis: the aim is not to extinguish one’s quest, but to promote it, and to articulate it within a group or society. It is for this reason that the spatial layout of the clinic is itself designed to promote integration: users can socialize in common living rooms, are invited to cook together, to share meals and so on. In terms of social integration, the combined work of patients, families and staff has yielded results. Based on the most recent data, after three years of treatment, the number of users who are active (working, studying or volunteering) rose from 24% to 71%, and the majority (56%) became financially self-sufficient (compared to 28% before entering treatment) .
“What I like about the 388 is that it is a house that is more open to external life, which does not marginalize us, which does not isolate us, which does not cut our ties with the outside world. Here, I feel like I am rebuilding my life in a solid way, with better perception, a better guide to face external life.”
One of the main goals of the team is to avoid hospitalisation. Accordingly, in addition to regular outpatient psychiatric care, the centre is open 24/7 so its staff can answer phone calls and provide more intensive social support when needed. If this isn’t enough, 4 bedrooms (with 5 beds) are available for short-term stays during acute crises. The idea behind this is to allow users a safe and open environment to work and reflect on their crises as they emerge, so that they can ultimately understand the meanings of the crises, and manage their crises with new tools. Those measures, combined with the clinic’s integrative care, allow for a significant reduction in hospital stays: throughout their first three years of treatment, users spent 78% less days in a hospital than compared to the three years before they began attending the centre .
“During my last hospitalisation, […] I told [the psychiatrist] that I was hearing voices: “Oh, just don’t pay attention to them !” […] If I can’t talk about them, if I can’t approach them, learn to deal with them, try to understand them, try to understand what they are doing here, their reason, their cause, if we don’t treat them, imagine the consequences of a psychosis, after which we end up in the hospital twice a year!”
A psychoanalytic approach to psychiatric symptoms can sometimes diverge from the neurobiological perspective, particularly when it comes to the meaning of these symptoms. Psychodynamic therapists generally tend to explore the inner world in which symptoms arise, guiding the patient to gain knowledge about the meaning of symptoms. At the “388”, psychiatrists share this attitude towards psychotic symptoms and extend it to their understanding of the role of antipsychotic drugs. Even if there is absolutely no forced treatment in the centre, psychiatrists still follow up-to-date pharmacotherapeutic guidelines. However, they may focus on patients’ attitudes towards medication, exploring their perceptions and trying to reach an agreement before prescribing. The purpose behind pharmacologic treatment isn’t necessarily to eliminate symptoms per se, but to reduce them enough to allow for self-direction, creative activities, psychotherapy and social integration.
“A comparison: drugs are a little bit like a band-aid, and when you pull the band-aid off, it bleeds again. With psychoanalysis, you don’t need a band-aid anymore, the wound has healed!”
Predictably, because of what may seem like political, ideological or economical reasons, since its foundation the “388” has been somewhat marginalised by traditional psychiatric institutions. In the beginning of the 2000’s, the “388” had to fight for its very existence: critics argued that it should close, as psychoanalysis is irrelevant. In response to these concerns, in 2002, an independent committee was appointed by Quebec’s Health Ministry to settle the debate. Through its study, the committee concluded that considering the excellent quality of medical care, the global approach and the high rates of satisfaction among users and families, the “388” should preserve the program as it was being administered. It is indeed what the “388” did, and what it intends to keep doing. Yet, because of substantial reforms being carried out in the mental health field in the province, the centre’s current form may again be jeopardized in the upcoming years. We may however remain optimistic, for though the center has gone through many trials and tribulations, it has survived, supported by the trust of patients and their families. In these terms, we may conclude this brief presentation of the “388” by reflecting on the words of one user:
“I think that at the 388 they believe in the power of humans, in the humanism that inhabits in all of us and that everything is possible with this humanism, with this humanist approach which gives us back our dignity and our self-esteem. Step by step, we reconstruct then we recreate our lives.”
For more information, feel free to contact us or to visit http://www.gifric.com/388.htm

References
1. Apollon W., Bergeron D., Cantin L., & al. (2013) Un Avenir pour le psychotique, le dispositif du traitement psychanalytique, Collection Nœud, Éditions du GIFRIC.
2. Apollon W., Bergeron D., Cantin L., (1990), Traiter la psychose, Collection Nœud, Éditions du GIFRIC.
3. Data drawn from the “388’s” most recent results, as they were presented at the 51th annual conference of the AMPQ (Quebec’s Association of Psychiatrists) in 2017. All the information about the center, its treatment and its results can be found on the GIFRIC’s website. GIFRIC is the psychoanalytic organisation whose analysts have created this approach to the treatment of psychosis. See http://www.gifric.com/Index-en.htm

4 thoughts on “Guest blog: The 388, a Psychoanalytic Centre for the Treatment of Psychosis”